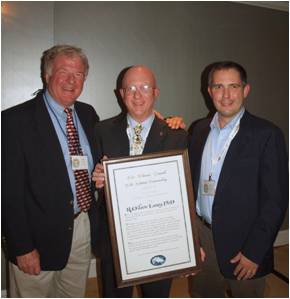 Dr. Laney has served on the Atlantic States Marine Fisheries Commission’s Habitat Committee for nearly two decades, and has served as its Chair.  He was instrumental in the creation of the Atlantic Coastal Fish Habitat Partnership and serves on its Steering Committee.  He has been a key contributor to a range of important Commission and Partnership products and has played a vital role in bringing together management initiatives at the Federal, state, inter-state, and local levels.

Dr. Laney possesses a deep commitment to conservation, a keen attention to sound science as the basis for resource management, and a friendly and engaging personality, qualities that embody Dr. Laser’s own dedicated approach towards fish habitat conservation.

The award is established in memory of Dr. Melissa Laser, who was a biologist with the Maine Department of Marine Resources, where she worked tirelessly to protect, improve and restore aquatic ecosystems in Maine and along the entire Atlantic Coast.  Dr. Laser brought her smiling dedication and enthusiasm to the Atlantic States Marine Fisheries Commission’s Habitat Committee and Atlantic Coastal Fish Habitat Partnership’s Steering Committee, catalyzed by the Commission in 2006.  Her contributions to these committees and to her home state were tremendous.