Over the past two decades Bonnie and Jim have worked tirelessly without financial compensation to protect one of the most important fish breeding grounds in the Chesapeake Bay watershed, Mattawoman Creek. It is used by Atlantic striped bass, American and hickory shad, alewife, and blueback herring for spawning and nursery habitat. It is one of the more productive and high quality tributaries to the Bay and is also facing significant development pressure. Their efforts not only helped to preserve a watershed threatened with conversion to other uses in this southern Maryland stream system, but also played an important role in maintaining the ecological resiliency of the watershed. One of their greatest achievements has been the recent resource-friendly comprehensive growth plan adopted by Charles County.  Among other things, the plan recognizes the role of conserving Mattawoman Creek’s watershed for anadromous fish. This comprehensive, ground-breaking growth plan provides a blueprint for future growth, both in Maryland and along the coast, while also addressing the needs of fish and wildlife in the area. Through their diligent voluntary efforts, Bonnie and Jim greatly aided the Department of Natural Resources by collecting data that otherwise would not exist. In turn, they used the science generated by these data to defend their beloved watershed.

In presenting the award, Dr. Wilson Laney, ACFHP Steering Committee member and previous award recipient, stated, “In protecting fish habitat in Mattawoman Creek, Bonnie and Jim have displayed tenacity, energy, intelligence, and superior organizational skills. Managing inland fish habitat is challenging because these watersheds are under the jurisdiction of local, not state or federal, governments with which the natural resources management community often do not have sufficient collaboration. Bonnie and Jim provide a glowing example of how to achieve significant success through positive influence on local decision-making processes.”

In addition to the comprehensive growth plan, their accomplishments include protecting more than 1,000 acres along Mattawoman Creek, stopping the proposed Cross County Connector Extension across the watershed’s headwaters in Charles County, and encouraging replacement of the road project with a proposed bike path. Further, they promoted a 10% impervious surface cap within the watershed and served as enthusiastic citizen scientists collecting the critical fish spawning and habitat data necessary to support their efforts. They also attend and testify at countless development hearings.

The Melissa Laser Fish Habitat Conservation Award is bestowed upon individuals deemed to further the conservation, protection, restoration, and enhancement of habitat for native Atlantic coastal, estuarine-dependent, and diadromous fishes in a unique or extraordinary manner. The award was established in memory of Dr. Melissa Laser who passed away unexpectedly on April 27, 2010. Melissa was a biologist with the Maine Department of Marine Resources where she worked tirelessly to protect, improve, and restore aquatic ecosystems in Maine and along the entire Atlantic coast. As an astute strategic thinker and leader, Melissa edited and coordinated the Strategic and Operational Plan for the Restoration of Diadromous and Resident Fishes to the Penobscot River. She coordinated fish passage projects, managed and oversaw the biological field staff for the Maine Western Region, and was the Bureau of Sea Run Fisheries and Habitat Program lead for habitat restoration studies and projects. She was also an effective champion for Atlantic salmon, directing and coordinating Endangered Species Act-related actions pertaining to the species. Melissa brought her smiling dedication and enthusiasm to the Commission’s Habitat Committee and ACFHP’s Steering Committee. 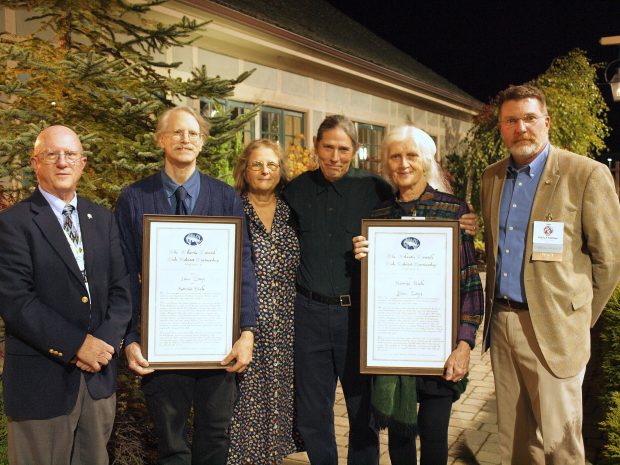