Mr. Beal is directly responsible for the restoration of 400 acres of coastal marsh in Florida’s Mosquito Lagoon, working with partners to secure federal grants in excess of $1 million for this effort, the success of which led to multiple millions in grant funding applied to estuarine habitat projects within Florida. Ever partnership minded, Mr. Beal completed the restoration of the Miller’s Landing Oxbow on the St. Lucie River. Cut off from the main stem of the St. Lucie River North Fork for over 60 years, this system now provides accessible habitat for fish and wildlife using the river, including estuarine fish like snook and red drum. Not resting on these significant accomplishments, he has worked with Harbor Branch Oceanographic Institute partners to promote advanced genetic marker technology in order to assess stressors to the St. Lucie Reef system. The results of this effort have already influenced the management of freshwater delivery to the estuary from Lake Okeechobee, benefiting coastal fish communities. Mr. Beal is a dedicated aquatic habitat restoration practitioner, who targets and fulfills the Atlantic Coastal Fish Habitat Partnership’s conservation goals, and finds innovative means to make beneficial fish habitat projects happen. He is an exceptional asset to Florida’s fish habitat conservation program, as well as ACFHP’s Science and Data Committee, and exemplifies the virtues of this award in all that he does.

The Melissa Laser Fish Habitat Conservation Award is bestowed upon individuals deemed to further the conservation, protection, restoration, and enhancement of habitat for native Atlantic coastal, estuarine-dependent, and diadromous fishes in a unique or extraordinary manner. The award was established in memory of Dr. Melissa Laser who passed away unexpectedly on April 27, 2010. Melissa was a biologist with the Maine Department of Marine Resources where she worked tirelessly to protect, improve, and restore aquatic ecosystems in Maine and along the entire Atlantic coast. As an astute strategic thinker and leader, Melissa edited and coordinated the Strategic and Operational Plan for the Restoration of Diadromous and Resident Fishes to the Penobscot River. She coordinated fish passage projects, managed and oversaw the biological field staff for the Maine Western Region, and was the Bureau of Sea Run Fisheries and Habitat Program lead for habitat restoration studies and projects. She was also an effective champion for Atlantic salmon, directing and coordinating Endangered Species Act-related actions pertaining to the species. Melissa brought her smiling dedication and enthusiasm to the Commission’s Habitat Committee and ACFHP’s Steering Committee. 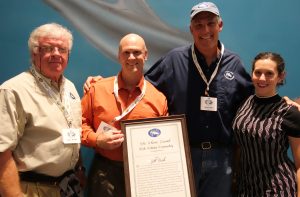