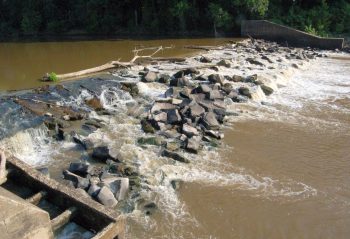 This project was funded in FY2015 through National Fish Habitat Action Plan funding.

The Cape Fear River was one of the most productive rivers for sturgeon and American shad in North Carolina at the beginning of the 20th century, but current commercial landings are 87% lower than historic estimates. This project, led by the Cape Fear River Watch, provided spawning habitat for these species by enhancing approximately 0.5 acres of riverine spawning habitat (by adding 1,000 tons of gravel), which in turn facilitated 32 miles of larval rearing habitat. Funding from NFHP-US Fish and Wildlife Service went towards biological monitoring and side-scan sonar analysis to both ensure the project was a success and to inform future projects with similar enhancement goals.